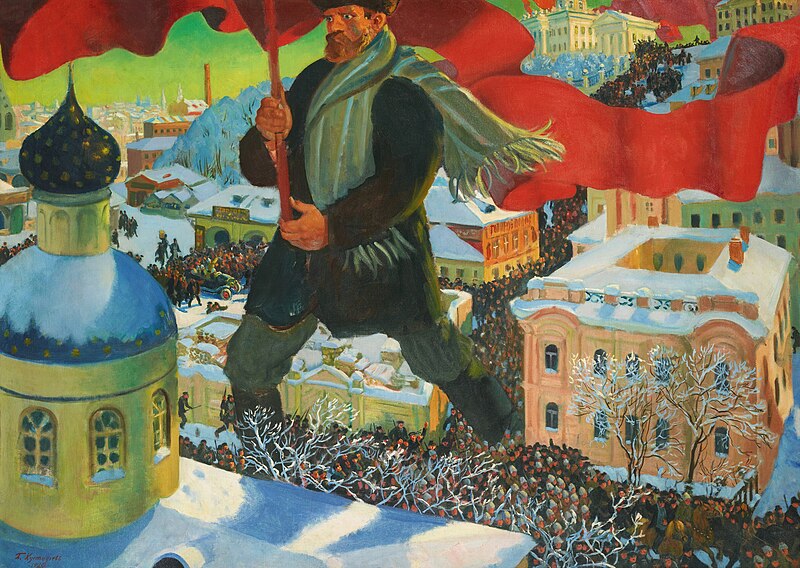 Boris Mikhailovich Kustodiev was no stranger to hardship. At a young age, his father passed away leaving all of the financial burden to his mother. However, Kustodiev would find his success in art. At a young age he found himself as an assistant to the famous Ilya Repin. Repin said, “I pin great hopes on Kustodiev. He is a tal­ented artist and a thoughtful and serious man with a deep love of art; he is making a careful study of nature.”

In 1903, Kustodiev would obtain permission to travel and visited Spain and France. While away, he realized his love for Russia, or as he called it the “blessed Russian land.” The Revolution of 1905 would further spark the fire within the artist, and he began working for satirical papers which supported the working class against the autocracy.

From 1919 to 1920, Kustodiev worked on the painting above known as The Bolshevik. The painting was known for its bold style and composition. The painting represents the pride gained from the changes that occurred during 1905 and 1917. The word “Bolshevik” means “majority”, in the case of early 20th century Russia would be the working class. The painting depicts the masses of middle to lower class citizens marching on what appears to be the Kremlin. The large man who seems to be almost giant in size is carrying a large red banner that seems to encompass the entire landscape. This seems to represent the Bolshevik movement and how their efforts have empowered the “majority” of people in Russian society. The large red banner also represents Russian pride throughout the land.

Kustodiev was known to love his country and this painting shows his undying pride the “blessed Russian land.”